The present Grasmere Players society goes back to 1949, although from 1893 to the Second World War a Grasmere amateur 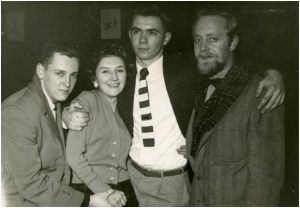 dramatic society performed dialect plays, mostly written by Mrs Rawnsley. The present company uses the same village hall that was built for the dialect plays. The facilities are far better than those available for many amateur groups and many items were bought with money raised by the Players. The curtains, seating, stage lighting, sound system and even the grand piano were all provided in this way.

One important tradition is that the plays performed by the Players must not only be entertaining; they must be worthwhile. The twelve founders led by Jim and Flo Hildrew and Frank and Edith Straw, who met at the Gold Rill Hotel on November 17th 1949 were determined to aim high. Since then authors have included Shakespeare, Shaw, Moliere, Barrie, Somerset Maughan, Sean O’Casey, Oscar Wilde, Tom Stoppard, Alan Ayckbourn, Arthur Miller, Jean Anouilh, Georges Feydeau, Sheridan, Coward, Thornton Wilder and J.B. Priestley. We have even staged a world premiere! In 1970, we put on Wordsworth’s only play “The Borderers” and had reviews in national English newspapers and American university magazines. Original musicals, melodramas and pantomimes have been written by Jim Rees and Annie Miller, with music composed by Reg Griffiths and Ken Hodgkinson. 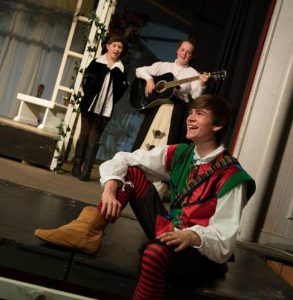 Another tradition, that the summer play should have an extended run on Wednesdays in June and early July, is linked to this emphasis on high quality productions. Visitors have been known to book their holidays to coincide with the Players’ summer season. Actors find it more satisfying to play parts which continue to develop. The profits made in the summer finance the winter plays. At times there are extra productions during the summer, usually on Thursdays; these have included Music Halls, anthologies of music, poetry and prose on subjects ranging from Love to the Lakeland Fells. Under the umbrella of the players organisation a Youth Theatre Workshop has been held  in the October half-term for a number of years, culminating in an excellent production to show the results of  their hard work throughout the week.

Social events are arranged throughout the year. There have been theatre trips which are usually to the ‘Theatre by the Lake’ but have ranged from Blackpool, Manchester, Ulverston, Morecambe and Lancaster. Play readings take place on an occasional basis and a garden party with a variety of entertainment has been a feature of our summer programme for many years. Every year a special programme of music, readings, traditional food and drink is a highlight of the Christmas