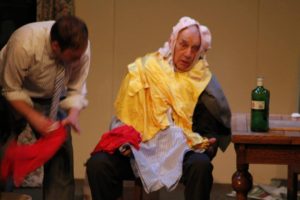 Grasmere Players is an amateur dramatic society set up in 1949, putting on two plays a year, initially in spring and autumn, now in the summer and at Christmas.  Currently, the summer play runs for two performances a week for six weeks in June and July, enabling a fresh group of holiday visitors to swell our audience numbers each week, and a pantomime or children’s play runs for four performances shortly before Christmas.

The Christmas production is very much geared to giving an opportunity to all our members to take part, especially the younger ones, who also have the opportunity to attend our Youth Theatre during the October half-term holiday when they spend a week learning all apects of putting on a play, culminating in a performance of the show they have written and produced themselves.

Our productions are staged in Grasmere Hall where we have recently acquired our own Green Room which gives us a permanent base and where we store our considerable stock of costumes.  Facilities are good, if in need of a little updating, as the hall was originally built with theatrical performances in mind.

We also have occasional social evenings with our own entertainment based around a theme such as, this year, Shakespeare and, just after the Christmas show, we present our Christmas Readings for the village (and beyond), a pleasant evening of varied poetry, prose and music with mince pies and punch, which is a popular event to begin the Christmas festivities.

We have a committee of up to twelve members, elected annually at our July AGM, and consisting of a Chairman, Vice Chairman, Secretary, Treasurer, Social Secretary, Equipment Manager, Publicity Manager, Wardrobe Manager and four other members.  The committee meets monthly to discuss various matters but, most importantly, to choose and cast plays.

We have a membership of around 50 but are always very pleased to welcome new members, experienced in matters theatrical or not, and have lots of opportunities for all manner of skills, from acting, directing, set-building, stage management, lighting and sound and costume to front-of-house, providing the very necessary refreshments and ticket sales.